This post will be a bit of a mish-mosh, as several things have been happening.

First, Dollhouses, Trains and More, our local (about a 30-minute drive away) miniature and hobby store, announced that it would be closing its doors at the end of October.  ☹  It is sad to lose a brick-and-mortar store, especially one as large and well-stocked as that one, but the good news was that everything is 40% off.  We made a pilgrimage on Sunday, and I probably spent more than I should have, but I tried to buy things I knew I would actually use.

I bought a lot of frames, including one that was perfect for Samantha's cardinal painting, so that is finally framed and hung in the bungalow.  Woo hoo! 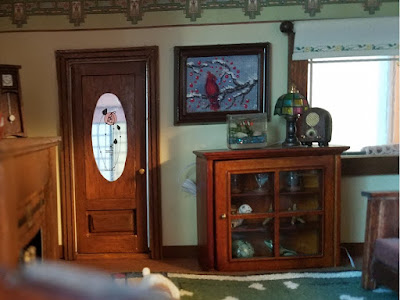 Second, I made a minor splurge on a Victorian settee to replace the rather ungainly day bed I had in the Fairfield's upstairs sitting room.  Now the end table looks a bit large (sigh), but I do think the settee fits the room better.  I still need to replace the pots on the etagere. 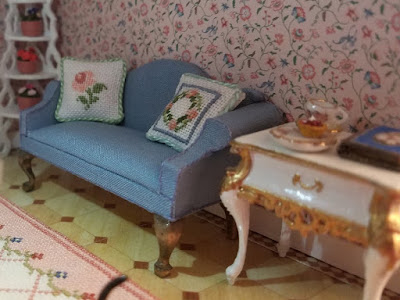 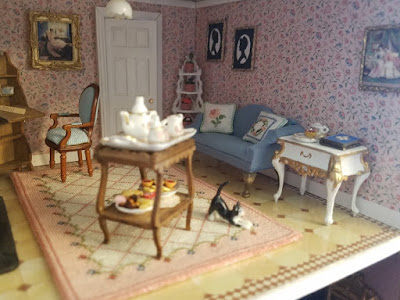 I also got half a dozen half-scale cats because I always like animals in my builds, and . . . 40% off!  I love this little cutie who has taken up residence on the rocking chair in the Fairfield kitchen.  The kitty-cat love of my life was a gray tabby with white paws and bib.  Effie likes having her as company in the kitchen.  She is an unusually well-behaved kitty and never gets on the table.  😉 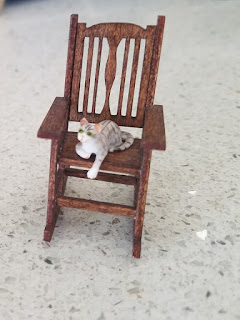 My next project for the Fairfield is supposed to be the window boxes.  I have purchased several from Heritage LaserWorks and just need to make them up and fill them.  However, I've gotten sidetracked with my Christmas baskets.  I am trying to make truly equivalent baskets in both 1:12 scale and 1:24 scale.

Things I am thinking of including: 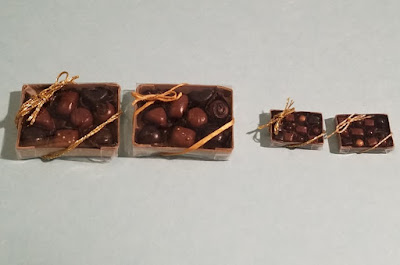 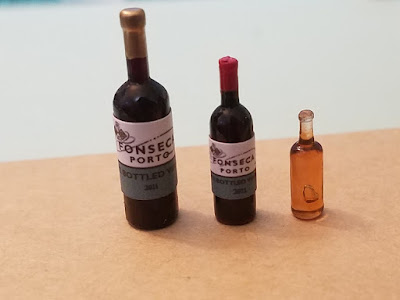 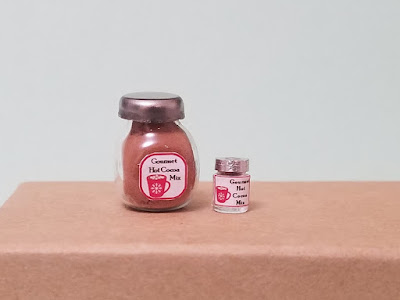 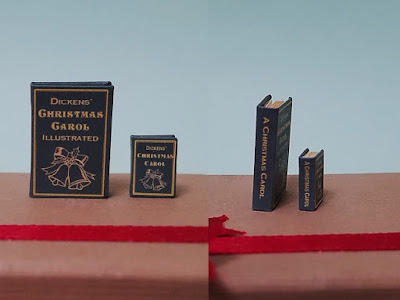 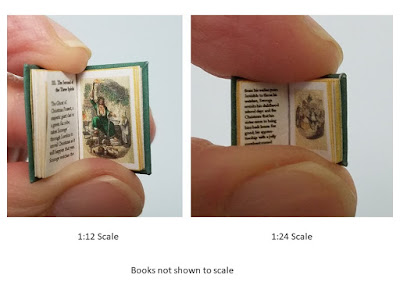 And A Visit from St. Nicholas (aka Twas the Night before Christmas): 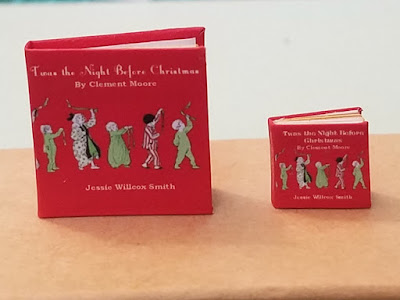 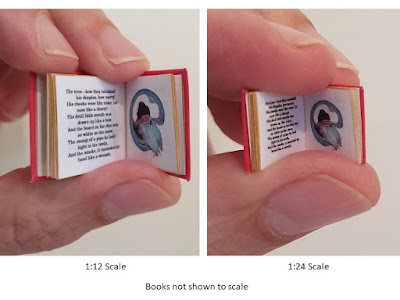 In both scales, A Christmas Carol has a full synopsis of the story; Twas the Night Before Christmas has the complete text of the poem. 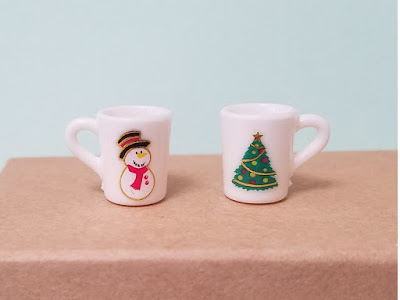 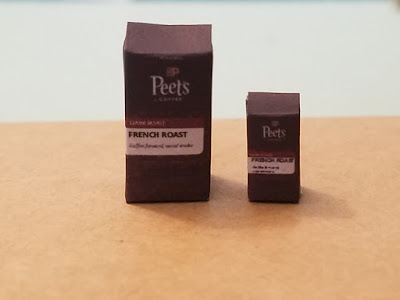 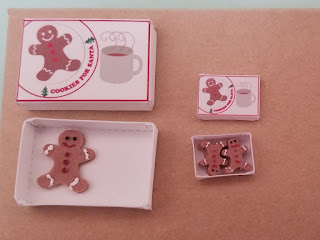 A couple of years ago, I bought a very nice mold from Stewart Dollhouse Creations for 1:24 scale, and I have been using that.  When I bought the molds for the 1:12 scale chocolates, I also bought a gingerbread mold, but I am not as happy with it.  So for fun, I thought I would see if I could make my own.

I printed out a generic gingerbread man image in the size I wanted—a high-resolution version on paper and several regular versions on card stock.  I stacked four card stock men, with the high-res paper image on top, and after gluing them together, sanded around the edges. I used glue to outline the mouth and the wrist and ankle frosting (unfortunately, you can't really see that in the picture), and glued microbeads on for the eyes and buttons. 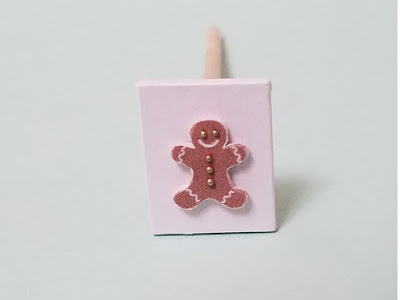 I have some Easy Mold 2-part silicone putty from Blick; you mix equal parts together, and then you have about three minutes to make your mold.  It cures in 20 minutes.  It takes only a little bit each time, so I still have plenty left, even after all my experiments (and there were more than I detail here 😊).

On my first try, I glued a toothpick directly to the back of my gingerbread man and stamped him into the mold.  The problem was it was difficult to get an even impression, and the silicon tends to smoosh up around the edges, making it difficult to fill the mold with clay and then scrape any excess off evenly. 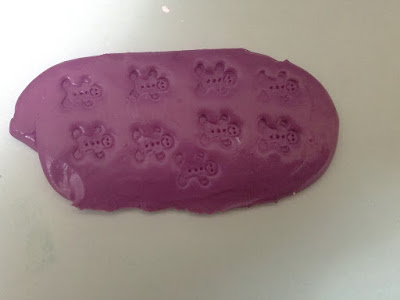 When, after a couple of tries, I realized that was just never going to work, I glued the gingerbread man to a small square of mat board, then glued a toothpick to the back.  I didn't try to stamp more than one cookie, and I left my prototype in the silicon until it had set. 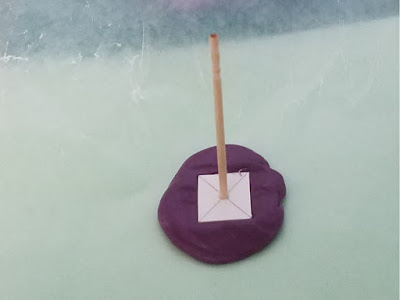 The silicon still pushed up around the edges, but I was easily able to slice that off with my utility knife, making a smooth, even mold that was easy to fill. 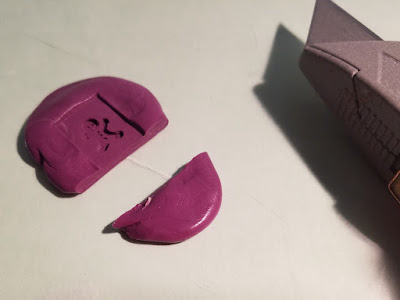 He's not perfect, but I don't think he turned out too badly. 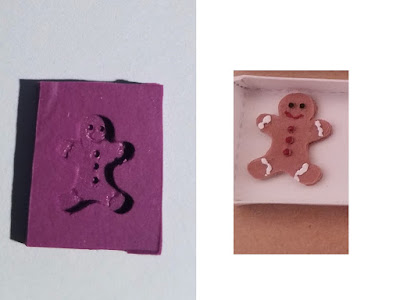 And that was my mini week.  I won't be able to mini for a few days, but I'll definitely still be online to see other people's work, which is always such a treat.  Have a great weekend, everyone!