Besides working to finalize some things for the proposed Etsy store (I did make the saddle shoes and two more 1:12 purses), I have not been doing quite as much miniature work as I normally would because I have been getting ready for our annual Thanksgiving mystery dinner.

Every year for the past ten or so years, we've dreamed up a mystery for our guests to solve, then created the clues they will need to solve it.  Over the years, we've had letters, magazine ads, dry-cleaning slips, train timetables, posters, sewing patterns, cocktail napkins, photos, paintings, a crossword puzzle, and even the plans for a Rube Goldberg machine among our clues.  Between dinner and dessert, we provide our guests with the clues (sometimes in a very careful order) and see who can solve the mystery first.  Some years, we vary the mystery-solving process to keep things from getting boring, and this year the mystery has quite a few escape room elements.  I can't say any more about it, because I happen to know that some of our guests read this blog. :-P  However, I can show you what we did a couple of years ago, when we decided to create a Frances Glessner-Lee-style "diorama of death"  as part of our mystery.  If you haven't heard of her before, it's worth checking out the link.  She was a fascinating woman, and her work is still used by police departments to train investigators. 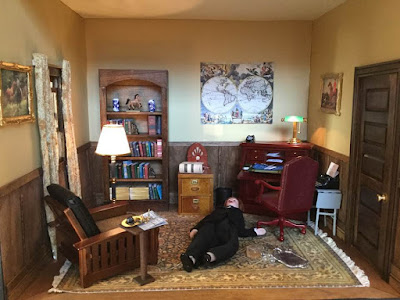 For this project, I worked in 1:12 scale, for a couple of reasons:

1.  Half scale is just a little too tiny for folks to really see and dig around in.

2.  There is so much readily available in 1:12 scale that I was able to put the room box itself together relatively quickly.  The only things I really had to make, besides the clues, were the typing table and the radio (which some of you may recognize as a Kris Compass project).

I built the box from simple foam core, covered in wood-grain contact paper and trimmed out with a little strip wood.  The floor was wood veneer, and the rug was printed on velvet paper.  I wasn't going to ruin a perfectly good miniature rug with a "blood" stain! 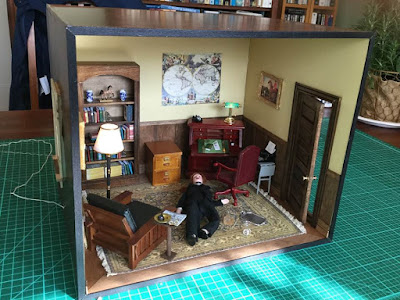 I have to say, it was a joy being able to work with 1:12 hardware.  Ready-made windows that really opened!  (And that open window was a clue.  😉) 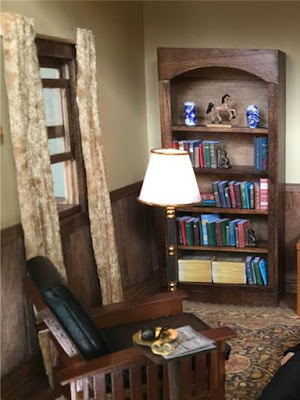 Clues were everywhere.  On and in the desk: 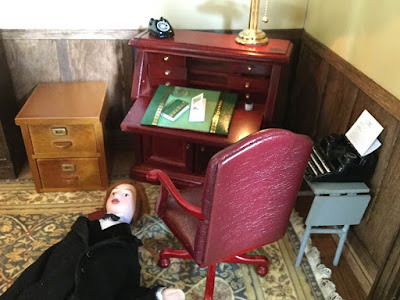 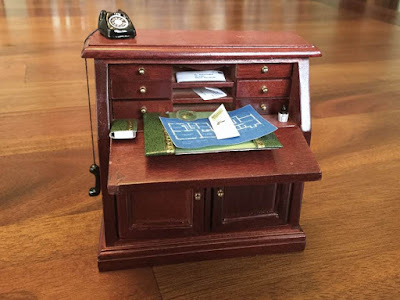 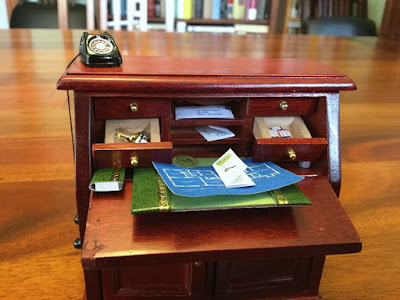 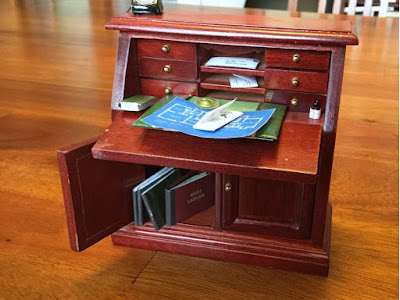 In the file cabinet: 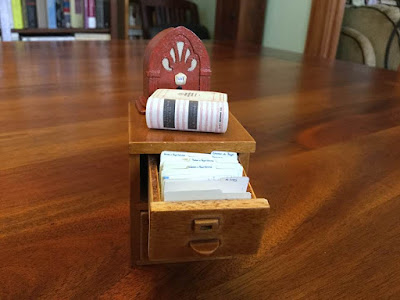 In the waste basket and in the typewriter: 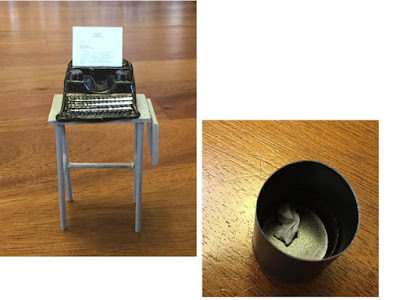 And, of course, on the bookshelves: 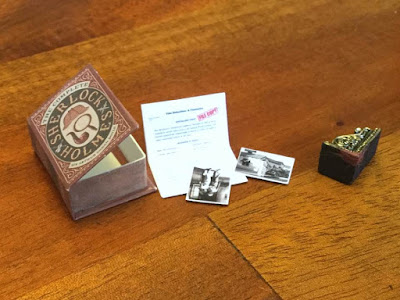 I created most of the clues full scale, then shrunk them down to miniature size: 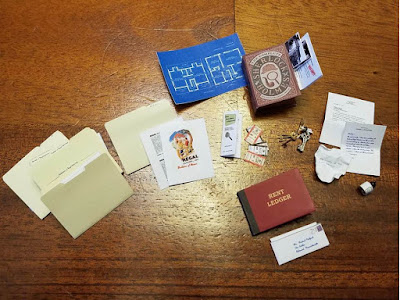 As guests found the mini clues, they were given the full-size clues to read.  Reading such tiny text with eyes "of a certain age" is not all the easy, and we didn't want to make things that hard.  😊 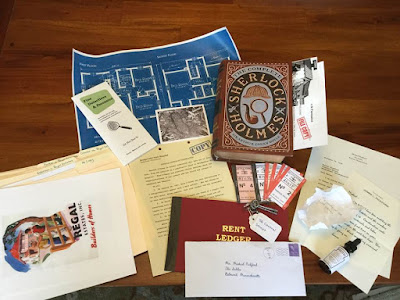 One problem with having guests be able to touch the diorama is that they did disturb the evidence.  One guest "helpfully" hung up the phone because the receiver seemed to have fallen off the hook. (No, no!  That was a clue!)  But having our friends be able to observe the "crime scene" in 3-D added a fun and interesting element to the mystery that year.  Oh, and we stumped them.  No one got the solution exactly right, so we ended up awarding the prize to the person who got the closest.


We're hoping this year's mystery is just as much fun, even though it doesn't include any miniature elements.  I've certainly been having fun making the clues and puzzles for it.
Hope you all have a wonderful week and happy mini-ing!