A Garden for the Fairfield

You may remember the start of the kitchen garden for the Fairfield.  I should point out (although it will likely be obvious) that I am not a gardener in real life.  I definitely don't have a green thumb and can barely tell one plant from another.  I did look at a lot of pictures online and did my best to mimic them, but if any plants don't like quite right, just blame my ignorance.  😊  Real gardeners will probably smack their foreheads because I've likely got plants from different seasons going on, but I knew what I wanted in my garden.  I did make an effort to put companion plants together, but that was about the extent of my realism, I'm afraid. 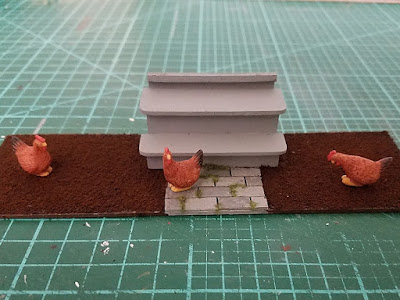 To start with, I followed the wonderful tutorials from Jodi at My Miniature Madness to make the lettuce and onions.  I think Jodi used crepe paper sheets for her lettuce.  I found some in our neighborhood.  They were a great color, but I thought the paper might be a little too heavy for half scale.  Instead, I used crepe paper streamers.  The color was very LIME!, so I tried to tone it down a bit with a Prismacolor marker in Green Tea.  It didn't mess up the texture of the crepe paper at all, although it took a surprisingly long time to dry. 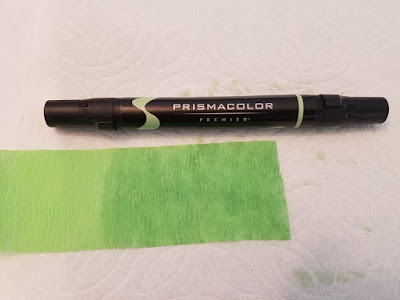 Instead of using a toothpick for my base, as Jodi's instructions call for, I used a length of wood dowel that I had previously shaved down with my jeweler's draw plate for another project.  This dowel was a little skewed and got caught in the draw plate, roughening it up a bit, so I ended up not using it for the original project.  It always pays to hang on to things, though.  Here it is next to a toothpick.  The smaller size is necessary to work in half scale, and it doesn't matter if it's a bit rough or skewed. 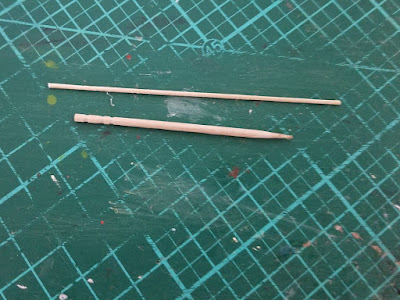 For the lettuce leaves, I cut my strips ¼" high, then cut them into pieces ¼" wide.  This would be a bit wider than half of Jodi's measurements, but I found it worked better when wrapping the leaves.

My onions were painted on tissue paper (both sides) rather than typing paper.  For me, the thinner paper works better in half scale.  Below you can see the veggies (and sage) sitting in the foam block, waiting to be deployed. 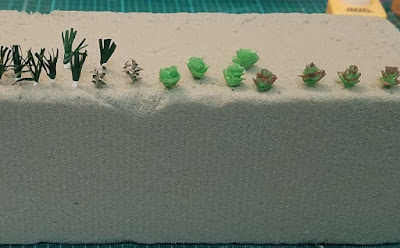 My other veggies started as polymer clay.  I made squash, beans, tomatoes, and carrots.  The red tomatoes were a mixture of red, orange and translucent clay; the green were green, yellow, white and translucent.  I added a bit of brown and white to my orange for the carrots so that they wouldn't look quite so bright.  The beans are green, yellow and quite a bit of brown.   Here they are waiting to go in the oven. 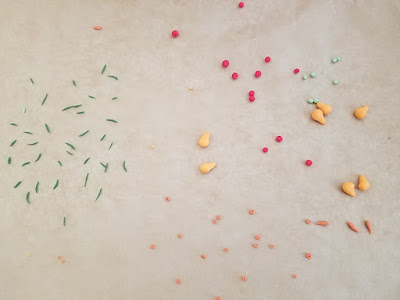 Once the clay was baked, I needed to set up the tomatoes for hanging from the vines of my plants.  I glued a single strand of dark green embroidery floss to the top of each tomato, splaying out the end as much as possible when I glued it down, then painted the tomatoes with satin varnish.  I couldn't figure out where to hang them to dry, so I ended up using painter's tape along the edge of my craft desk.  I stuck just one end of the tape strip to my desk.  As I added each tomato to the line, I pressed down a bit more of the painter's tape on top of it. 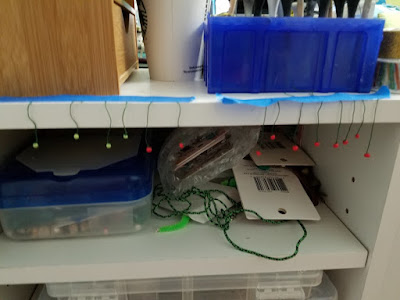 Next I built my best approximation of the armature for the plants. The spousal unit (who is the gardener in our family) told me I could not have beans without a trellis, so I built a little one out of model railroad lumber.  On the right-hand side, you can see the holes I drilled with my pin vise to receive the dowels from my lettuce and onions.  Jodi used foam board, but I needed to go as thin as possible for my garden. 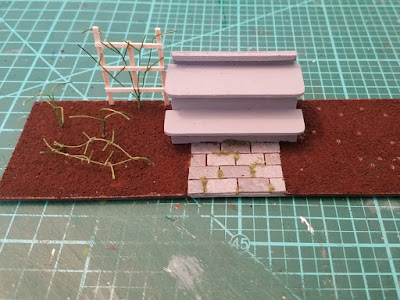 Next, I glued the veggies in place.  I used superglue for the beans and squash, but regular tacky glue for the tomatoes. 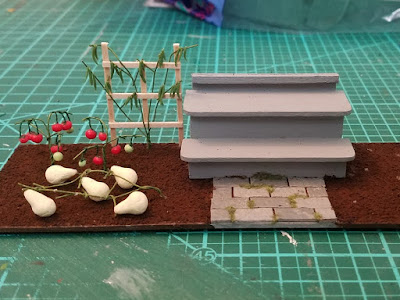 For the leaves of the tomatoes, I used a mini PunchBunch Japanese maple leaf punch and tissue paper painted "Leaf Green."  Some of the leaves I left whole, while others I cut apart into 2- and 3-leaf segments.  For the squash, I used a mini PunchBunch maple leaf punch and painted my paper with Delta Ceramcoat "Medium Foliage Green";  I added some veining to the back with Delta Ceramcoat Dark Foliage Green.  For the beans, I used the bottom three leaves of the small PunchBunch ash leaf.  I used Sprout Green Patio Paint for these leaves, but I don't think I'd use this type of paint again.  It kept jamming my punch.  It helped to wait 24 hours, until the paint was absolutely, thoroughly dry, but it still took some doing to punch all the leaves I needed.  (I had tried a couple of different colors first—dark and medium green foliage, and, while I didn’t really like either color for the bean leaves, neither of them caused any trouble for this punch.) 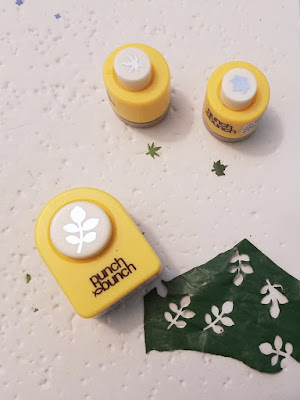 The leaves were all shaped with my ball stylus on my foam and glued on to the plants.

The carrots were my biggest problem.  I had made little flat round bits of orange to stick up above the ground as the tops of the carrots and had put a hole in the center of each with a large pin.  I had no idea what I was going to use for the greenery.  I tried feathers, but had no luck dyeing them or painting them to get the green I wanted.  The paint just caused all the feathery bits to clump together.  ☹ Finally, I took a strand of embroidery floss, stiffened it with hairspray, and, when it was dry, glued a couple of lengths of it into each hole.  Then I cut flock from the same embroidery floss and glued it to the stiffened strands.  Not perfect, but it's all about the illusion, right?  😉 I also made some herbs and flowers.  The sage was the easiest.  I used some SEI velvet paper in Asparagus, which is really a soft gray-green.  After painting the back a (sort of) matching color, I used my Fiskar's "Starlets" corner punch, which has a flower petal shape as one of the options, to cut out the little leaves.  I was worried the velvet paper might be hard to punch, but it cut like a dream. 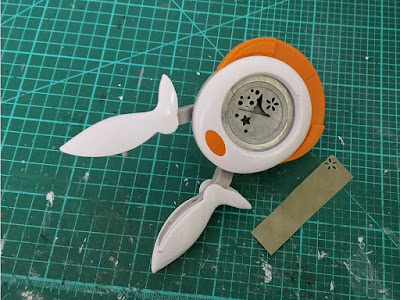 I used my small round stylus and my foam mat to curl the leaves before gluing them (velvety side up) to the wire stems.  I think they look pretty good.

I made two types of marigolds.  For most, I used the tissue paper method (measurements adjusted to half scale), which is super quick and simple.  I already had tissue paper the right color on hand, so that was a bonus.  For my other marigolds, I used a Fiskars Flower border punch.  The multi-petaled shape was easier to work with than a bunch of individual petals. 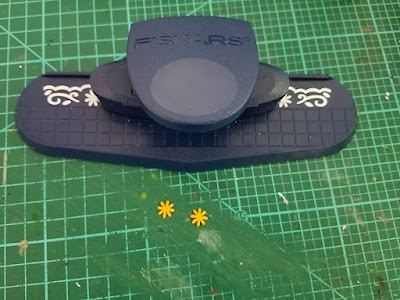 These flowers I cut out of regular paper in "Goldenrod."  Then I used Apple Barrel's Tapestry Wine to paint just the tip of each petal, almost as though I was giving it a manicure.  As you can see, I made different lengths of colors, so that I would have petals of varying lengths. 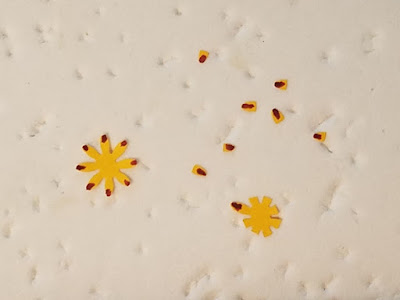 When the paint was dry, I cut each tip off just past the point where the paint ended.  My first couple of marigolds, I left the petals squared off.  However, marigold petals are gently rounded, so on my next batch I rounded the petals off a bit.  I dipped the end of a piece of wire in glue and then in turmeric for the flower's center.  Then I curled the petals on my foam and glued them around the center, shorter petals on the inside, longer petals on the outside.  For both types of marigolds, I used dried moss for the leaves. 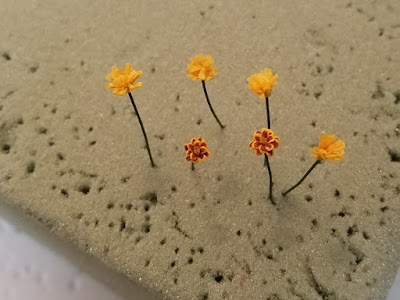 Here is the right-hand side "planted"—red and green lettuce, carrots, onions, sage and marigolds.  Can you see what that chicken is eyeing on the lettuce leaf?  😉  Could that be a fat, juicy bug? 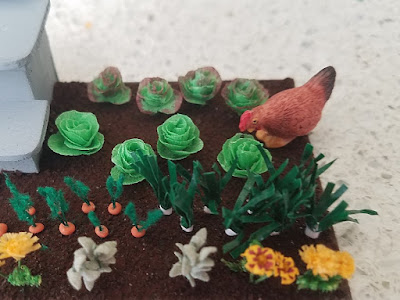 For my other herbs, I just approximated basil and oregano.  When I looked at them individually, they didn't look all that different, but it turns out that oregano leaves are quite a bit smaller than basil leaves.  (I know all you cooks out there are snickering right now. I mostly use dried herbs, and I've never really paid attention to what they look like in nature.)  For my basil leaves, I used my Medium Foliage Green painted tissue paper and my Starlets corner punch (the same as I'd used for my sage).  For the smaller, upper leaves, I cut a few medium flowers from my Martha Stewart Punch-Around-the-Page Flower Shower punch set and snipped them apart like a pie.  This punch set (which, unfortunately, has been discontinued, although it can still be found on eBay) is one of my favorites and is worth seeking out if you like making your own half-scale flowers and plants.  I use the small and tiny flowers all the time for making everything from lilacs to geraniums. 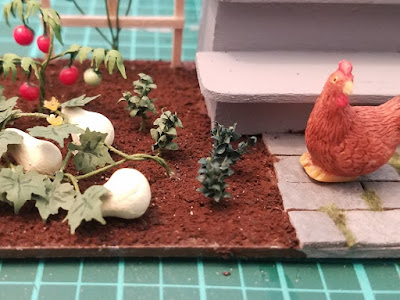 For the oregano, I cut my leaves only from the medium and small flowers in the Martha Stewart punches.  This was a very tedious process, but I eventually finished, and added my herbs and a few more marigolds to the left-hand side. 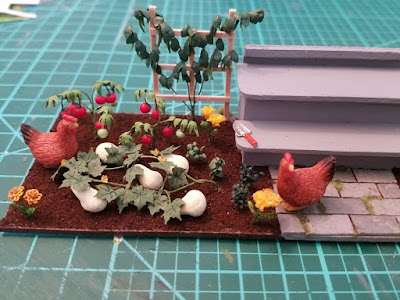 So there's the garden done and in place, the way I always wanted it. 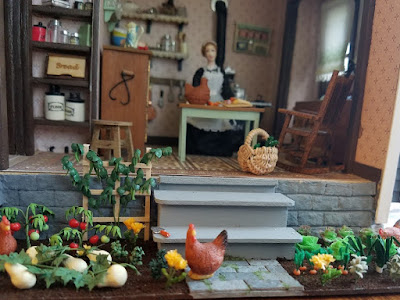 Effie is so happy to have all those fresh veggies and herbs just a few steps away! 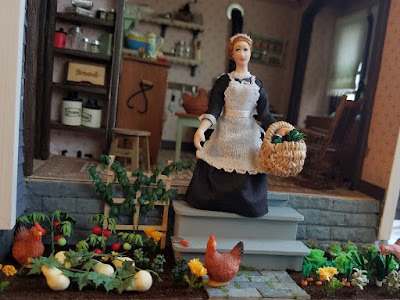 And then I started thinking about where those chickens were going to sleep, and how Effie would love to be able to collect fresh eggs for her baking, and you'll never guess what I started making next.  😉  More to come.

Have a great mini week, everyone!