One Project Ends, Another Begins

Once again, time got away from me.  Only this time, instead of being in a stagnant state, where I could not seem to work on my miniatures, I have been making minis like crazy!  There is so much to report on, I hardly know where to begin.

First, the deco house is finished.  It's not much different than when you last saw it, except that I have added a little landscaping and some plants to the deck. 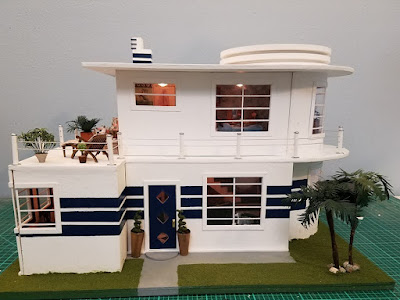 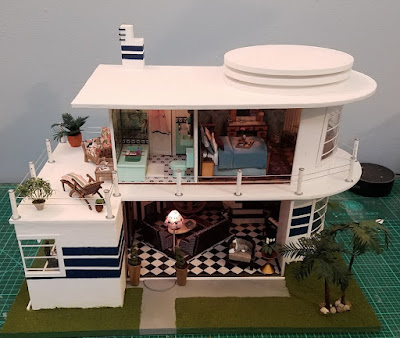 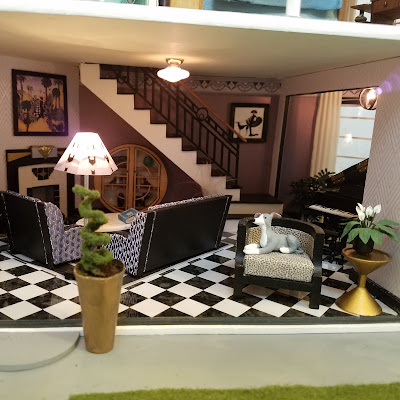 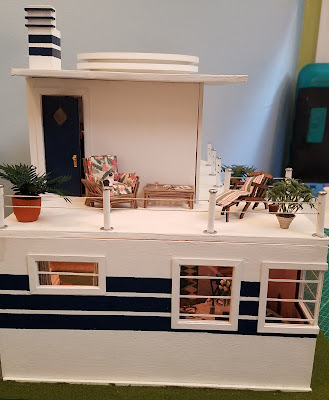 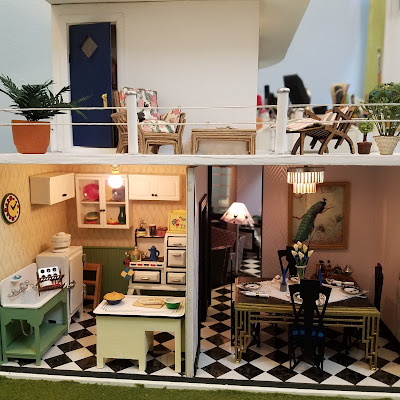 The house has now moved off my craft table and onto a bookshelf, making way for a new project, which is—the lighthouse and keeper's cottage!  Here they are in dry fit. 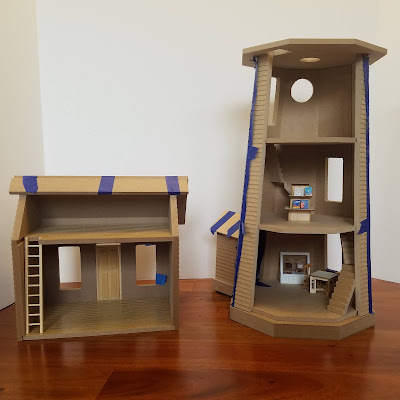 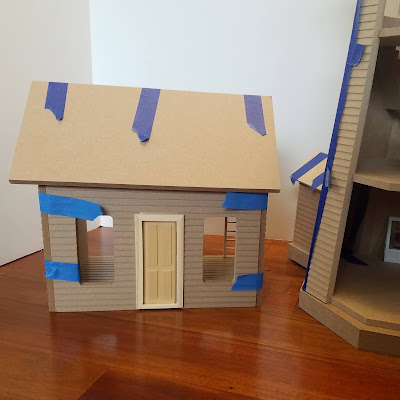 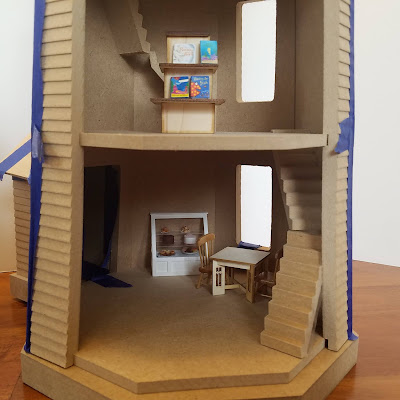 Dry fit is so helpful for planning.  Right away I noticed several things.  1)  The windows of the keeper's cottage are too narrow.  Since the cottage will become a museum and gift shop, it will need wider display windows.  2)  There is a lot of nice room in the first-floor tearoom.  I had originally planned on two tables.  Maybe I will be able to fit three.  3) There is not a lot of wall space for bookshelves for the second-floor bookstore.  Originally, I was going to have an office on the third floor, but the bookstore may need to take up two floors.

I got started on the keeper's cottage and immediately widened the holes for the windows by about ¼ inch on either side.  This helps with the display space but doesn't interfere with the structural integrity of the front wall.  You can see the original window opening on the right and the widened window opening on the left. 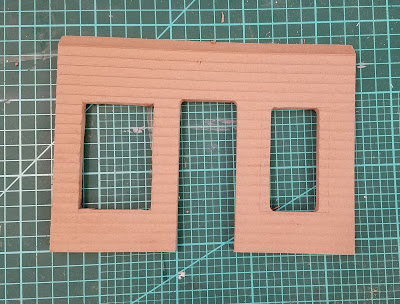 That did mean I also had to make my own windows to replace the ones provided by Real Good Toys, but I was OK with that.  I got used to making windows for both Sagamore Hill and the deco house.  😊  And then, before I knew it, the house was built!  That has to be some kind of record for me.  With the siding milled in and the floors already finished, it really only took a weekend to put the structure together—a nice change from the builds I've been doing.  I will be using a battery-operated light in the house, as it is so small and not really worth the effort of plug-in lighting.  The sign over the door was made from one of the original shutters, which can no longer be used now that the windows have been widened. 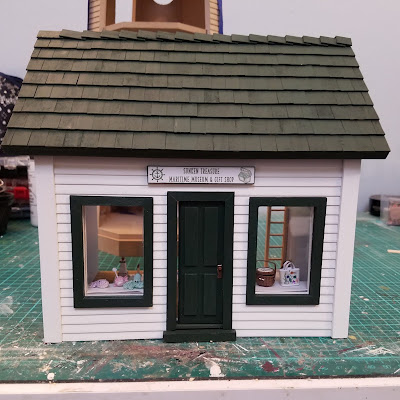 I've made display stands for in back of both windows.  They are removable so that I can pull the
in and out to change the displays.  I'm also working on a glass display case and a counter for displaying my ships. 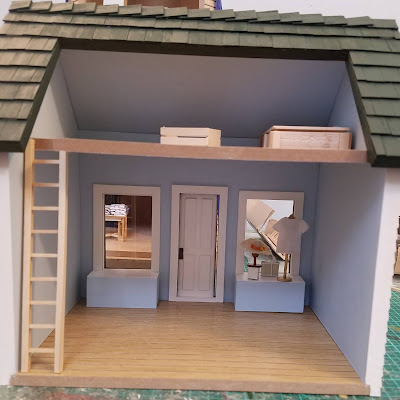 And now for the real fun—all the little items I have purchased or made for the new project.  More paintings have arrived, and I really love them.  However, I really wanted a traditional sailing ship, and wasn't able to find anything in the size I wanted.  I am not a painter, but I can cross-stitch and was lucky enough to find a pattern that, when stitched on 36-count fabric, is a workable size.  While hunting for the ship pattern, I also found a tiny lighthouse pattern, so I made that up, too. 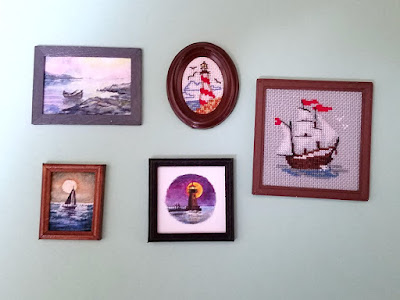 All the goodies for the tearoom arrived.  Don't they look yummy? 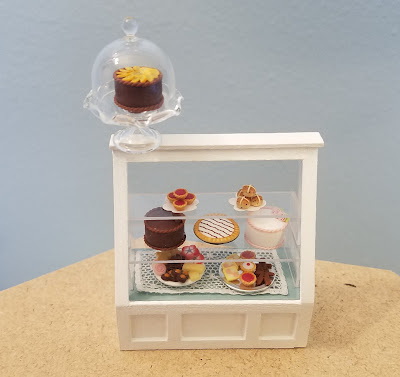 The tearoom table kits come with kits for little tiered stands.  I made them up and added my own scones, finger sandwiches and dishes of jam and clotted cream. 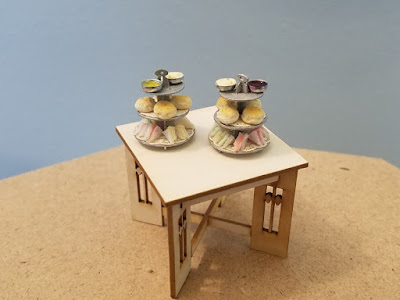 I also made up a test table.  Things are a bit tight on the tabletop, but I think I can make it work.  Also, with that extra space, I may be able to enlarge the tabletops. 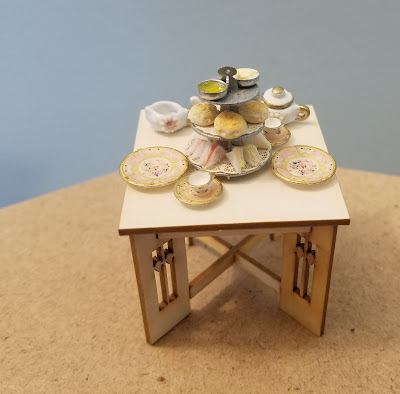 The tables and chairs are designed to be painted silver with lavender backs and seats.  I'm not sure that will work for a nautical tearoom, but I can't decide whether to keep them that way or change them.  And if I change them, what colors I would use instead.  The tables and chairs are made of card, so staining is out.  White with blue?  Would that be too expected and too boring?  I do have some nautical scrapbook paper that incorporates a lot of purple, and the sign as I've currently designed it is purple. 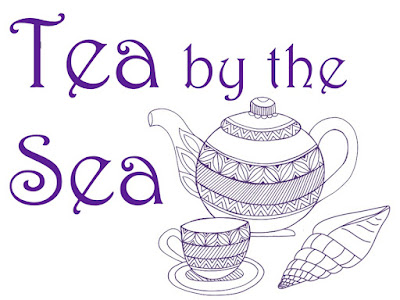 Maybe I should keep the lavender, but go with black or white paint?  What to do, what to do?

For the bookstore—I've been making lots and lots of little books, mostly children's books or cozy seaside mysteries.  To get in the mood, I have been borrowing many of these mysteries from my local library via Libby to read on my Kindle.  Borrowing is a great way to try them, because, well, some of them written are better than others.  In the picture, you can also see one of the bags I made for the bookstore, which is called "Whale Tales." 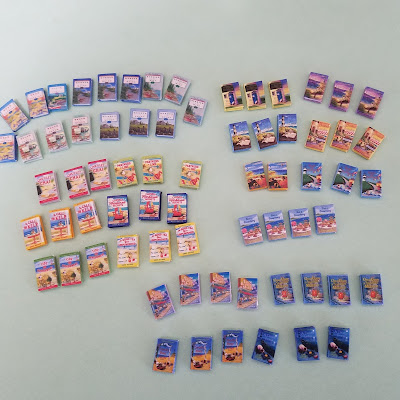 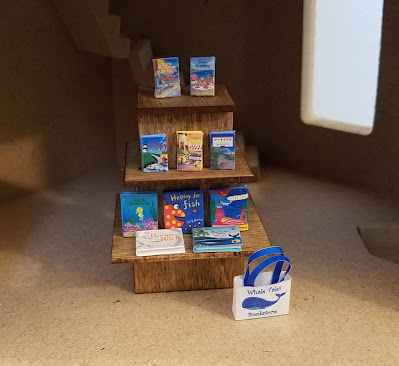 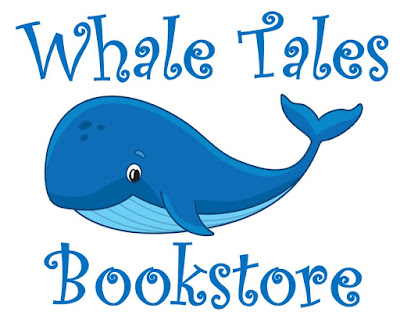 I do have plans for a lot more books (which is why I think I'll need two floors).  Of course, I'll have to have classics like Moby Dick and Twenty Thousand Leagues under the Sea.  Then there will be books on history and geography, cookbooks, books for older children, magazines. . . .  You get the idea.

For the museum, more ships have been painted for the display.  I still haven't had any success building a ship in a bottle.  My first effort, which involved making a mold of a bottle, placing a teeny-tiny little ship inside, and filling it with resin, was a resounding failure.  The bubbles never dissipated, and part of the ship's mast ended up sticking out through one side of the bottle.  *sigh*  Still thinking about it, though. 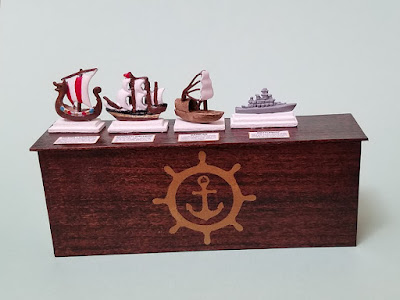 More successful was my attempt at a lightship basket, which you may remember that my mother had suggested.  I made up the basket itself with instructions from One-Inch Minis; I made my own form from polymer clay.  The "scrimshaw" on the top is made from an oval of wood painted ivory and sanded as smooth as possible.  I then drew on the whale with an ultra-fine point permanent marking pen and finished with a bit of satin varnish.  The "frame" for the scrimshaw was made by wrapping some of my painted crochet cotton around a piece of florist's wire.  I like that it made a rounded edge for the top of the basket.  The "hinge" is a snippet of 1/8" inch ribbon, and the closure is a loop of the crochet cotton and a bit of florist's wire painted ivory.  Effie was very happy to get to model it, but sorry she couldn't keep it. 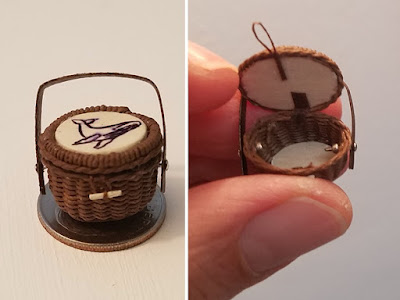 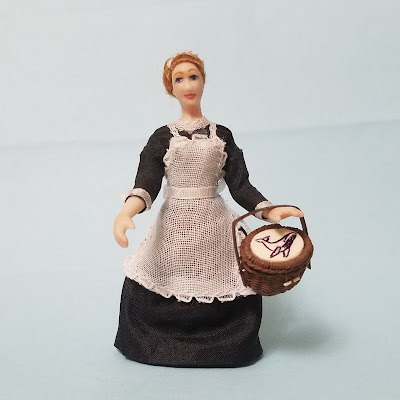 I also wanted a diving helmet.  I bought a quarter-scale 3-D printed one from Stewart Dollhouse Creations thinking it might work as a scale model, but I felt it was too small for the museum.  It is now a model sold that will be sold in the gift shop.  For the museum display, I made a half-scale version with a wooden bead, some jump rings, tin foil, a microbead and a crimp bead.  With a little bronze paint and verdigris, it's a pretty good facsimile. 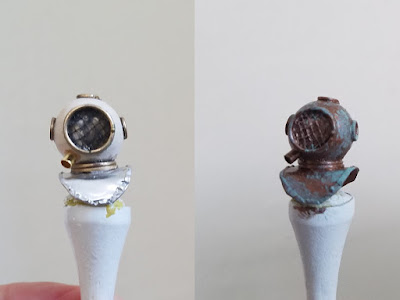 Other items for the gift shop include a little seashell arrangement with a tiny seagull made from polymer clay (I also made a "full-size" seagull for the lighthouse), a mermaid statue and a fishing plaque (both painted metal minis), another amigurumi whale (this time I was actually able to make the two colors work!), a beach ball, some sea glass jewelry, and some t-shirts. 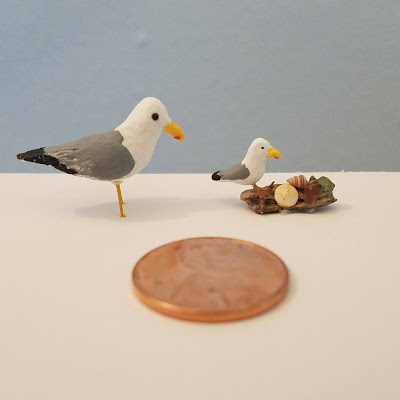 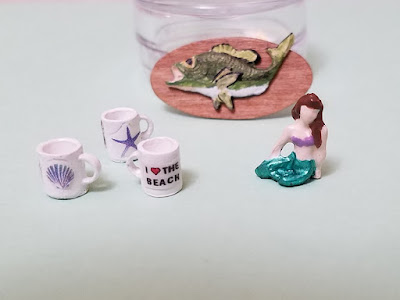 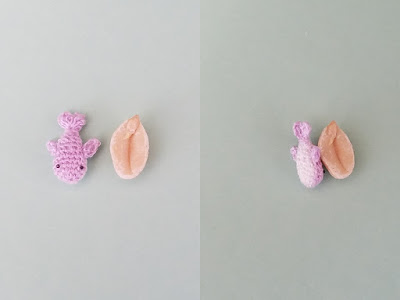 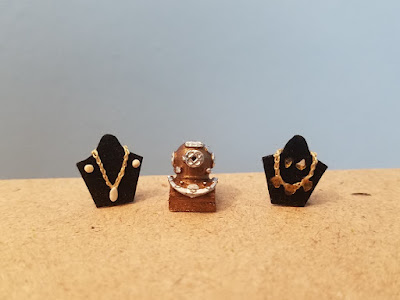 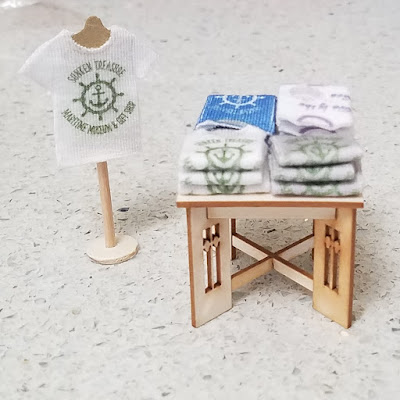 The printing on the t-shirts isn't all that great, and up close they look more like sweaters than t-shirts, but with a bit of distance, I think they work fine. (The spousal unit has now said I need to make a hooded sweatshirt. 😮)  I borrowed one of the tables from the tearoom to display them, but they'll have a table of their own at some point.  Most recently, I made up one of my garden hats with an extra row around the edge to give it a nice, floppy brim, and it is now a sun hat. 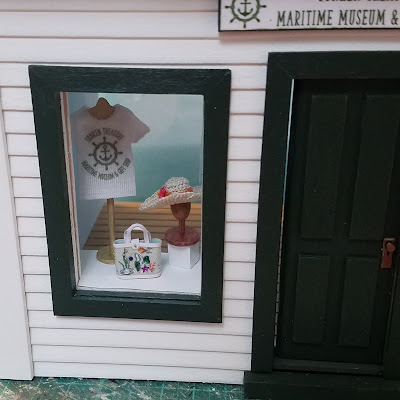 Does the window display tempt you to enter my shop? 😉  I am thinking the other window may have toys in it.

I've actually made more since I started writing this, but I think that's enough for now.  Until next time (which will, I hope, be sooner rather than later)!